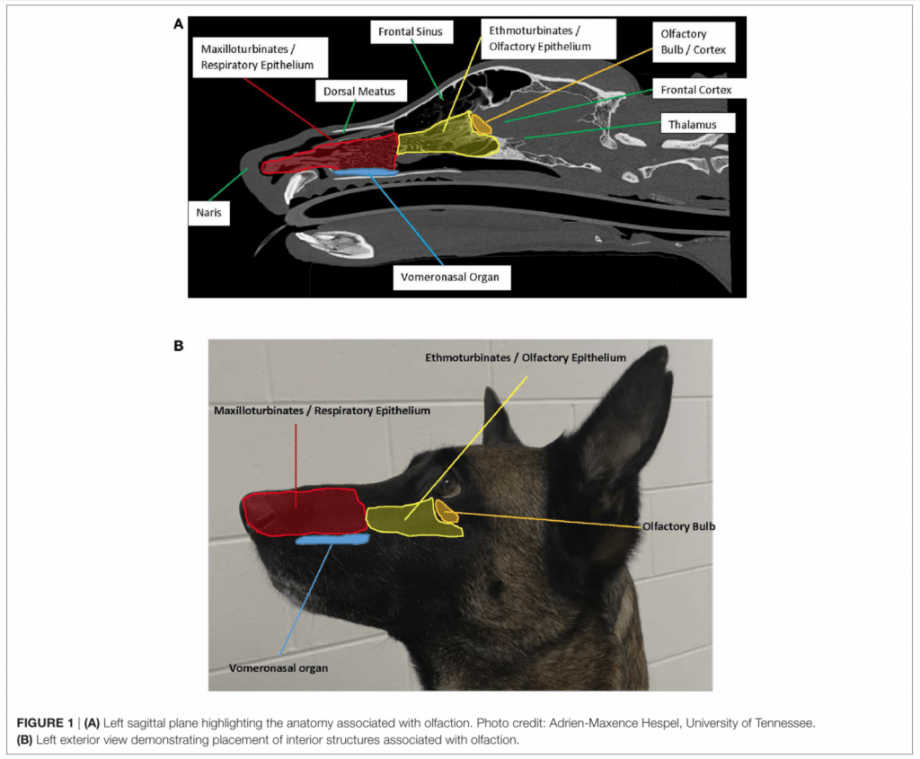 The impact of health, management, and microbiota on olfactory function in canines has not been examined in review. The most important characteristic of the detection canine is its sense of smell. Olfactory receptors are primarily located on the ethmoturbinates of the nasal cavity. The vomeronasal organ is an additional site of odor detection that detects chemical signals that stimulate behavioral and/or physiological changes. Recent advances in the genetics of olfaction suggest that genetic changes, along with the unique anatomy and airflow of the canine nose, are responsible for the macrosmia of the species. Inflammation, alterations in blood flow and hydration, and systemic diseases alter olfaction and may impact working efficiency of detection canines. The scientific literature contains abundant information on the potential impact of pharmaceuticals on olfaction in humans, but only steroids, antibiotics, and anesthetic agents have been studied in the canine. Physical stressors including exercise, lack of conditioning, and high ambient temperature impact olfaction directly or indirectly in the canine. Dietary fat content, amount of food per meal, and timing of meals have been demonstrated to impact olfaction in mice and dogs. Gastrointestinal (GI) microbiota likely impacts olfaction via bidirectional communication between the GI tract and brain, and the microbiota is impacted by exercise, diet, and stress. The objective of this literature review is to discuss the specific effects of health, management, and microbiota shifts on olfactory performance in working canines.