Abstract: “OBJECTIVE: To examine potentially preventable factors in human dog bite-related fatalities (DBRFs) on the basis of data from sources that were more complete, verifiable, and accurate than media reports used in previous studies. DESIGN: 56 DBRFs occurring in the United States from 2000 to 2009. PROCEDURES: DBRFs were identified from media reports and detailed histories were compiled on the basis of reports from homicide detectives, animal control reports, and interviews with investigators for coding and descriptive analysis. RESULTS: Major co-occurrent factors for the 256 DBRFs included absence of an able-bodied person to intervene (n = 223 [87.1%]), incidental or no familiar relationship of victims with dogs (218 [85.2%]), owner failure to neuter dogs (216 [84.4%]), compromised ability of victims to interact appropriately with dogs (198 [77.4%]), dogs kept isolated from regular positive human interactions versus family dogs (195 [76.2%]), owners’ prior mismanagement of dogs (96 [37.5%]), and owners’ history of abuse or neglect of dogs (54 [21.1%]). Four or more of these factors co-occurred in 206 (80.5%) deaths. For 401 dogs described in various media accounts, reported breed differed for 124 (30.9%); for 346 dogs with both media and animal control breed reports, breed differed for 139 (40.2%). Valid breed determination was possible for only 45 (17.6%) DBRFs; 20 breeds, including 2 known mixes, were identified. CONCLUSIONS AND CLINICAL RELEVANCE: Most DBRFs were characterized by coincident, preventable factors; breed was not one of these. Study results supported previous recommendations for multifactorial approaches, instead of single-factor solutions such as breed-specific legislation, for dog bite prevention.”

Abstract: “Maiming and death due to dog bites are uncommon but preventable tragedies. We postulated that patients admitted to a level I trauma center with dog bites would have severe injuries and that the gravest injuries would be those caused by pit bulls…. We reviewed the medical records of patients admitted to our level I trauma center with dog bites during a 15-year period. We determined the demographic characteristics of the patients, their outcomes, and the breed and characteristics of the dogs that caused the injuries…. Our Trauma and Emergency Surgery Services treated 228 patients with dog bite injuries; for 82 of those patients, the breed of dog involved was recorded (29 were injured by pit bulls). Compared with attacks by other breeds of dogs, attacks by pit bulls were associated with a higher median Injury Severity Scale score (4 vs. 1; P = 0.002), a higher risk of an admission Glasgow Coma Scale score of 8 or lower (17.2% vs. 0%; P = 0.006), higher median hospital charges ($10,500 vs. $7200; P = 0.003), and a higher risk of death (10.3% vs. 0%; P = 0.041)…. Attacks by pit bulls are associated with higher morbidity rates, higher hospital charges, and a higher risk of death than are attacks by other breeds of dogs. Strict regulation of pit bulls may substantially reduce the US mortality rates related to dog bites.”

Abstract: “Weighted estimates were generated from data collected by surveying 9684 households during 2001-2003 and compared with results from a similar survey conducted in 1994. Estimates for persons aged 15-17 years were extrapolated on the basis of rates for 10-14-year-olds. Whereas the incidence of dog bites among adults remained relatively unchanged, there was a significant (47%) decline in the incidence of dog bites among children compared with that observed in the 1994 survey, particularly among boys and among those aged 0-4 years. Between 2001 and 2003, an estimated 4,521,300 persons were bitten each year. Of these, 885,000 required medical attention (19%). Children were more likely than adults to receive medical attention for a dog bite. Among adults, bite rates decreased with increasing age. Among children and adults, having a dog in the household was associated with a significantly increased incidence of dog bites, with increasing incidence also related to increasing numbers of dogs. Dog bites continue to be a public health problem affecting 1.5% of the U.S. population annually. Although comparison with similar data from 1994 suggests that bite rates for children are decreasing, there still appears to be a need for effective prevention programs.”

Abstract: “Children are the most frequent victims of dog bites presenting to hospital emergency departments (ED), but there are gaps in understanding of the circumstances of such bites. The objective of this study was to characterise the behavioural circumstances of dog bites by interviewing children ≤17 years (or parent proxies for children ≤6 years) presenting with dog bite injuries to the Children’s Hospital of Philadelphia about the bite incident, its setting and associated interactions. Of 203 children enrolled, 51% were <7 years old and 55% were male. 72% of children knew the biting dog. Most bites to younger children occurred during positive interactions, initiated by the child, with stationary, familiar dogs, indoors. Most older bitten children had been active (e.g., outdoors), unfamiliar with the dog and not interacting. Whereas face bites predominated (70%) in the younger group (<7 years), bites to extremities predominated (72%) in the older group. Recognition of the two distinctive behavioural and circumstantial subgroups of dog bites that emerged can lead to more effective prevention strategies.”

Abstract: “Records of bites to 111 children were examined. Children <6 years old were most commonly bitten in association with resource guarding (44%), whereas older children were most commonly bitten in association with territory guarding (23%). Similarly, food guarding was the most common circumstance for bites to familiar children (42%) and territory guarding for bites to unfamiliar children (53%). Behavioral screening of the 103 dogs examined revealed resource guarding (61%) and discipline measures (59%) as the most common stimuli for aggression. Anxiety screens revealed abnormalities in 77% of dogs. Potential contributory medical conditions were identified/suspected in 50% of dogs. When history before presentation was known, 66% of dogs had never previously bitten a child, and 19% had never bitten any human. Most dogs (93%) were neutered, and 66% of owners had taken their dogs to obedience training classes.… Most children were bitten by dogs with no history of biting children. There is a high rate of behavioral abnormalities (aggression and anxiety) in this canine population. Common calming measures (neutering, training) were not routinely effective deterrents.”

Abstract: “Dogs for which breed was reported involved in attacks on humans between 1979 and 1998 that resulted in human dog bite-related fatalities (DBRF). Data for human DBRF identified previously for the period of 1979 through 1996 were combined with human DBRF newly identified for 1997 and 1998. Human DBRF were identified by searching news accounts and by use of the Humane Society of the United States’ registry databank. During 1997 and 1998, at least 27 people died of dog bite attacks (18 in 1997 and 9 in 1998). At least 25 breeds of dogs have been involved in 238 human DBRF during the past 20 years. Pit bull-type dogs and Rottweilers were involved in more than half of these deaths. Of 227 reports with relevant data, 55 (24%) human deaths involved unrestrained dogs off their owners’ property, 133 (58%) involved unrestrained dogs on their owners’ property, 38 (17%) involved restrained dogs on their owners’ property, and 1 (< 1%) involved a restrained dog off its owner’s property. Although fatal attacks on humans appear to be a breed-specific problem (pit bull-type dogs and Rottweilers), other breeds may bite and cause fatalities at higher rates. Because of difficulties inherent in determining a dog’s breed with certainty, enforcement of breed-specific ordinances raises constitutional and practical issues. Fatal attacks represent a small proportion of dog bite injuries to humans and, therefore, should not be the primary factor driving public policy concerning dangerous dogs. Many practical alternatives to breed-specific ordinances exist and hold promise for prevention of dog bites.”

Abstract: “A human dog bite-related fatality generally refers to death proximately caused by trauma from a dog’s teeth and jaws. According to the Humane Society of the United States, more than 300 individuals died of dog attacks in the United States between 1979 and 1996. Children <12 and elders >70 years represent the typical victims. Pit bull-type dogs, Rottweilers and German Shepherds constitute the majority of canines implicated in these fatalities. This is a 15-year (1991-2005) retrospective review of dog bite-related fatalities undergoing medicolegal investigation in Kentucky. Of the 11 deaths, 10 consisted of multiple bite marks and blunt force injuries of the head and neck, trunk and extremities. In one case, an asplenic victim’s immediate cause of death was bacterial sepsis secondary to a dog bite. Individuals ranged between 14 months and 87 years; 7 (63.6%) were <=6 years; 10 (90.9%) individuals were white, and 8 (72.7%) were male. Forensic odontological examinations were performed on the dogs in four cases. The requisite multidisciplinary investigation includes a detailed assessment of the scene, the victim, and dog or dogs suspected in the attack.”

Abstract: “Dog bites account for a significant number of traumatic injuries in the pediatric population that often require medical treatment. Although agent, host and environmental characteristics of dog bites have been well documented, no attempt has been made to compare these characteristics by patient age group. The purpose of this study is to determine if differences exist in agent, host, and environmental characteristics among younger (less than or equal to 6 y) and older (>7 y) patients treated in a pediatric emergency department (ED) for dog bites. Findings from our study could be used to develop age-specific strategies for dog bite prevention…. The study setting was the ED at Children’s Hospital of Pittsburgh. Patients were enrolled between 1999 and 2000 and were identified through a review of ED records (n = 386) of children sustaining dog bites. Records were abstracted with a researcher-designed and validated form for agent (eg, breed, number of biting dogs, owner, rabies status), host (e.g., age, gender, number and location of bites, treatment), and environmental (e.g., bite month and time, bite location, events leading to the bite, ZIP code) characteristics. Data were analyzed using descriptive and inferential statistical tests…. Children younger than 6 years constituted 52.8% (n = 204) of the sample. As compared with older children, a higher proportion of younger children were bitten by their family dog (chi(2) = 27.64, P = 0.001) whose rabies shots were up to date (chi(2) = 12.08, P = 0.034). A higher proportion of younger children were bitten on the face (chi(2) = 49.54, P = 0.000) and were bitten in their own homes (chi(2) = 16.075, P = 0.013)…. Young children frequently sustain dog bites from their family dog in their own homes. Injuries typically involve severe lacerations to the face. Prevention strategies for young children include close supervision of child-dog interactions.”

Abstract: “The city of Winnipeg was the first among several jurisdictions in Manitoba, Canada, to introduce breed-specific legislation (BSL) by banning pit-bull type dogs in 1990. The objective of the present work was to study the effectiveness of BSL in Manitoba…. Temporal differences in incidence of dog-bite injury hospitalisations (DBIH) within and across Manitoba jurisdictions with and without BSL were compared. Incidence was calculated as the number of unique cases of DBIH divided by the total person-years at risk and expressed as the number per 100,000 person-years. Year of implementation determined the pre-BSL and post-BSL period for jurisdictions with BSL; for jurisdictions without BSL to date, the entire study period (1984-2006) was considered as the preimplementation period… A total of 16 urban and rural jurisdictions with pit-bull bans were identified. At the provincial level, there was a significant reduction in DBIH rates from the pre-BSL to post-BSL period (3.47 (95% CI 3.17 to 3.77) per 100,000 person-years to 2.84 (95% CI 2.53 to 3.15); p=0.005). In regression restricted to two urban jurisdictions, DBIH rate in Winnipeg relative to Brandon (a city without BSL) was significantly (p<0.001) lower after BSL (rate ratio (RR)=1.10 in people of all ages and 0.92 in those aged <20 years) than before (RR=1.29 and 1.28, respectively). BSL may have resulted in a reduction of DBIH in Winnipeg, and appeared more effective in protecting those aged <20 years.”

Abstract: “The Australian dog bite death rate (0.004/100,000) is lower than both the United States (0.05-0.07/100,000) and Canadian rates (0.007/100,000). [Victora state] hospitalized trend rates were stable between 1987 and 1998, but there was a decline for children <5 years (p=0.019) corresponding with a reduction in dog ownership. Children 0-4 years have the highest rate of serious injury, particularly facial. Adults have longer hospitalizations, most frequently for upper extremity injury. Risk factors include: child, males, households with dogs, certain breeds, male dogs, home location, and leashed dog…. Dog bite rates are high and it may therefore be assumed that current preventative interventions are inadequate. Responsible dog ownership, including separating young children from dogs, avoiding high-risk dogs, neutering, regulatory enforcement and standardized monitoring of bite rates are required. Controlled investigations of further risk and protective factors, and validated methods of breed identification, are needed.” 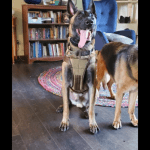