Barbara Woodhouse was a British dog trainer known for her television series “Training Dogs the Woodhouse Way” on BBC in 1980 across the UK as well as the USA. She was a household name in the UK for this TV series for her quirky personality and no-nonsense method of training the dogs and their owners. She was also known as an author and horse trainer.

Her internationally syndicated TV show at her house lasted for 10 episodes and was the first of its kind to showcase an experienced dog trainer. Here Barbara made famous the use of two commands for training dogs : “walkies” and “sit”. The latter was parodied by famous British spy film “Octopussy” in 1983 where James Bond used these two commands to tame a circus tiger.

Known for her affection towards animal from her childhood, Barbara Woodhouse was born May 9, 1910 in Rathfarnham, Ireland to an Irish family. After her father’s death in 1919 her mother moved to Headington in Oxford, where she attended Headington School and the only female student at the Harper Adams Agricultural College in Shropshire. She married Dr. Michael Woodhouse in 1940 after divorced her first husband Allan George Hill in August 1934.

Barbara insisted that through her training methods you can train any dog. She suggested applying some unique ways such as telepathy, different tones of voice, and a little love and affection. Barbara stunned British audience in 1980 to be named as the female TV personality of the year in Britain. During her TV show, she received about 400 letters a day could no longer go out in public without being stopped for advice. Her first record album sold in 25,000 copies in advance in 1967. 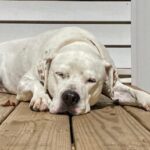