Why do dogs hump people, other dogs, things, stuffed animals, legs, the air, etc? And the big question…How do I get my dog to stop this humping?
In order to really stop your dog from humping or lesson all the humping, you must first understand the reason why dogs hump.
The first most obvious reason why a dog may hump is for actual mating, but if you are on this page most likely you are dealing with one of the other humping behaviors which may seem a little strange or may be causing a problem.
When not done for mating, it is generally an assertive but nonaggressive demand for interaction.
For example, if a dog humps another dog, that dog will generally stop humping if the other dog, or “humpee”, starts interacting with the humping dog. The “humper” is usually a dog with an assertive personality since in dog culture it is the dog of higher status which is allowed to initiate interaction. The “humpee” can be either a submissive personality or a dominant prone personality that chooses to ignore the “humper” as a non-aggressive way to not acknowledge the “humper’s” attempt to initiate and therefore lead the interaction. The “humper" is rarely a dog with a more submissive temperament since they are less likely to demand interaction and more likely to be met with aggression if the “humpee” is a more dominant dog in the relationship.
Now, when a dog does this humping behavior to a human, he or she is doing nothing more than transferring the inborn ritual to his human pack members or acquaintances. This is also the same when a dog humps a cat or other animal.
Sometimes a dog will hump a stuffed animal, pillow, blanket, or other object. Although this may seem strange, what the dog is actually doing is the same thing he would do if he was trying to interact or play with another dog that would not move. The ideal reaction from these objects in the dog’s mind would be for the object to start moving around so he could play with and control the interaction with the object.
A secondary side effect of this behavior can occasionally become masturbation. It seems to be an accidental discovery that the humping of objects can cause sexual satisfaction to some dogs. Not surprisingly, this can then become an impulsive behavior.
Therefore, it can be concluded that some humping behavior, especially toward other dogs is normal, but undesirable humping of people, over pestering of obviously disinterested dogs, and impulsive humping of objects can be improved with first troubleshooting leadership skills of the handler, making sure the dog has appropriate outlets for activity by looking at drive balance, and then guiding any left over undesirable behavior through true obedience.  This can easily be accomplished by following the proper steps in the Foundation Style Dog Training System. 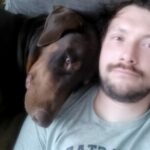