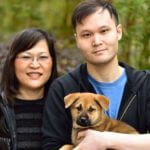 Hudson was adopted from Hong Kong Dog Rescue on January 15th, 2017 at 2-months old. We are unsure of his breed but listed him as a GSD (he's actually a mutt). Nowadays he weighs around 25kg and is a medium-sized dog.

As a dog, he is extremely friendly towards his family but very wary of strangers - wants to check them out, avoids being petted by strangers, may growl or bark (especially towards children). Towards other dogs, he's also very friendly and playful to dogs he knows well. He is generally more assertive in play - nips at neck and legs, tries to climb other dogs. When meeting other dogs for the first time, I tend to leash him and not allow him to greet the other dog until I let him because he can be reactive at times.

We realized some of his behaviours relatively early, but didn't find this website until later to learn more about them. These include resource guarding of food/water/toys/people. He has bitten another dog before from guarding a toy he picked up at a dog park.