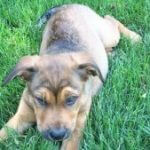 We believe that Sully is a 12-week old male German Shepherd/Rottweiler mix. He and his litter mates and his mother were rescued when the puppies were about a week old. They were found living under a porch in the Bronx. Sully has three sisters and one brother. We met the litter when they were about seven weeks old. Sully was the largest of the litter and struck us as the calmest and most confident. He's been with us for about a month and has been exposed to a wide variety of people and several other dogs. All the interactions were positive.