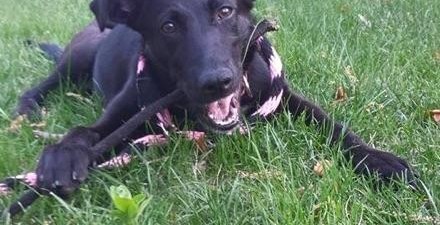 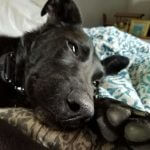 Sierra is a 2yr old female Shepard/border collie mix that we adopted as a rescue from a veterinarian in Virginia. She lives with my wife and I and our (3) boys ages 8, 11, and 12, and (2) other dogs ages 1 ½ and 11, and (2) cats. We have a large fenced yard (4 to 5 ft fence) with access to the back yard through a dog door in our back door. Neighbors on both sides have dogs. Sierra and the other dogs run up to the fence and bark at our neighbors and their dogs if they see them. They don’t try to go over or under the fence although they probably could if they wanted to. Sierra has only gotten out once when the gate was left open and ran over to the neighbors who were outside with their dogs, but she was pretty easy to get back when we called her once or twice. HISTORY: Brought into the vet in Virginia as a 2 or 3 month old stray puppy with a broken leg. Her surgery was done at the veterinarian school that Dr. Coleman was attending. She then stayed with Dr. Coleman for a couple of months during her rehab period. Dr. Coleman cared for her and brought her to classes and other events to help with her recovery and socialization. Dr. Coleman also brought her to work with her at the Centreville Animal Hospital for Daycare while she worked. At the animal hospital Sierra had contact with dogs, cats, and people through out the day which didn’t seem to bother her. When Sierra was about 5 months she was adopted briefly by a family but didn’t get along with either the cats or other dog or family members, or something else that caused her to be returned to Dr Coleman after about 1 month. Sierra then went to stay with Dr Coleman’s grandmother.  I think Dr. Coleman’s grandmother lived by herself, maybe in an apartment , and probably didn’t get too much socialization while she stayed there. After about 5 months Sierra had to be returned to Dr. Coleman because she was getting to be too much for her grandmother to handle. That was around November/December 2015. We heard about Sierra and her situation through a mutual friend of Dr. Coleman’s and ours. We adopted Sierra in February 2016. Dr. Coleman had told us about Sierra’s fear of strangers (fear aggression?) when we first met to talk about bringing Sierra home. The initial meeting with Sierra was at our home. We brought Sierra into our yard and let her run around with our other digs. Sierra was nervous around my wife and I, but very friendly with our dogs. It took about an hour for her to warm up to us and approach us and let us pet her. After a couple of days she seemed quite settled in our home, and by the end of the week she was very happy and comfortable with us and our kids (three boys under 12 yrs) and our other dogs, although she was still very fearful of strange people. She reacted to strangers by excessive barking and charging and backing away from people when they approached her, or approached the property. This stranger fear got worse over the next few months (March – May) to the point where we would keep her in another locked room if somebody came over and she would bark the entire time someone was there. We had a trainer come over who helped us with some training ideas but we couldn’t do too much at that point because Sierra would not settle down enough to be worked with. We worked on walking her at the park, or around other people, while giving her the distance from them that she was comfortable with. Sierra seemed OK being around strangers if they kept a distance of about 10 ft. We also had neighbors come to our front gate and give Sierra treats but that just upset her too much. A change we saw was when we went on vacation (August 2016) and decided to try putting her in a kennel close to where we were staying. When I dropped Sierra off at the kennel she had no problem walking into the office and through the hallways to the kennel area. She walked in and past the staff and other dogs with no barking, growling, or pulling on the leash. I called every day and she was fine with the staff. They could feed her and clean her cage with no problems. When I picked her up they walked her out on a leash and put her in my car. She was quite happy during her visit. After we left the kennel I stopped for gas and she immediately started with her over the top barking and lunging at the gas station attendant (from inside the car). Sierra’s biggest problem seems to be over protectiveness of our family and property.  Her stay at the kennel has made us realize that she can be  OK with strangers if she is not in full protection mode.