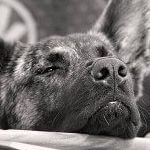 Laila is a three year old Doberman who was surrendered by owner after initial consultation for training. She was in a multi dog household and had been the victim of several attacks by the other dogs, severe enough to require medical treatment. Client also reported Laila was now 'attacking' one of the other younger dogs. After discussing management and leadership with client, she admitted she was unwilling and unlikely to change. She was to the point of having dog PTS. I took the dog for a brief period, on leash away from owner and house and observed, that while stressed, she responded to me and appeared more at ease away from her current environment. Upon seeing this, I agreed to take Laila to rehabilitate and rehome to a more suitable environment. Owner mentioned, but did not fully disclose, separation anxiety.

My initial assessment was a dog that had PTSD, and since this is a breed predisposed to be hyper aware of environment, I felt she never had a chance to distress. She was suffering from constant and chronic stress. Lack of leadership lead her to take her safety into her own (paws) and since owner was not preventing her from being attacked she would decide what was dangerous to her.