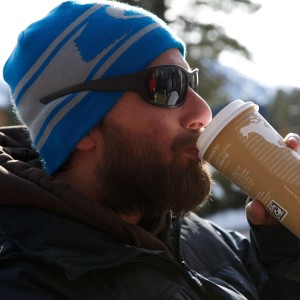 Bella is an American Bulldog, adopted from iCare of the Eastern Sierra in Big Pine, California on February 18, 2014. The adoption agency said she was about 1.5 years old, so we gave her a birth date of August 25, 2012. Bella was originally purchased from a local pet store and grew up on the Paiute Indian Reservation. At or around 1 year of age, she got pregnant, and the prior owners sold her puppies and then dropped her off at the animal shelter. When she arrived at the animal shelter she was dirty, malnourished, skinny, and had dry flaky skin. It appeared that she was not well cared for, and the puppies probably sucked her dry. When we adopted Bella she was about 62lbs, but full of life, and overall happy. We were in love! We brought her home, and within a few months, she put on some weight, and is now a healthy 85lbs.

When we adopted Bella, we were told that she was "snarky" with other dogs. However, when we brought her home, she seemed fine with the dogs in our complex, and we didn't have any problems. For the first six months we took her on walks with other dogs and to the dog park with no issues. Then one day, she attacked another dog, and then another, and another. We are not sure what triggered the change, but now she only gets along with our other dog, and a select few (maybe 2 - 3) other dogs, which she liked prior to becoming aggressive.

Bella is also uncomfortable with people being in her face, I get it. I don't want people in my face either, and I am still shocked about the number of people who think it is ok to love on other peoples dogs like they would love on their own dogs. But we have to be mindful, because Bella has already snapped and growled at a few people who crossed the line and invaded her personal space. Now when friends and family come over, we simply ask them not to put their face in her face. I know this is probably not fixing the root problem, but it is a good way to mitigate someone we care for, potentially getting bit by our dog.

Around the house Bella is a calm and lovable dog, but she has her quirks. 1) She tends to break nails on the trails, and if we try to touch and clean them, she will growl and snap at us. We are not scared of her or persuaded to clean them, but it is an expected part of the process. 2) She seems to have weak nerves, and is frightful. If we are in the backyard and she gets startled, her first reaction is aggression, however she also wants to run away from whatever startled her. I'm not sure what kind of life she had on the reservation, but from what I understand, I'm sure she was left to fend for herself, and maybe she is always on guard, or on edge?? 3) She is very sensitive. Or maybe this is also based on some type if fear?? 4) She is a stubborn bulldog. We have worked with her on come, sit, down, stay, and heal, but she seems to work on her own schedule. For treats she is spot on, and excited to work for us, but once the treats go away she pretty much gives us the middle finger. From watching the videos on the K9-1 YuoTube Channel, I'm sure we've missed a step in our training process.

Bella is a great dog, and we have a lot of love and respect for her. I want to be honest with myself and this group, and to not have the "my dog can do no wrong attitude." Bella is a "loose cannon", and potentially a liability which must constantly be managed. She is not good around dogs, doesn't like people in her face, and beats to her own drum. I know she has the potential to be a great dog, but I lack the skills to help her get there. I have tried a couple "positive" dog trainers in town, but they don't realy seem to know how to address her problems, other than to keep her isolated from encounters that could be harmful to ourselves or others. I know there is a better way.

It is easy to keep her away from dogs, and train people to not get in her face, but my biggest concern is kids. My wife and I want to have kids, and I know that most dog bites with kids occur in the home with the family dog. This is very scary to me, because I already have a dog that has red flags. I hope that this site will provide me the skills I need to help her become a more stable, obedient, and grounded dog. To give me the insights to understand dog behavior so I can see the subtle warning signs to mitigate a bad situation. And ultimately give me the confidence to make a decision whether our Bella, is going to continue to be part of our family.