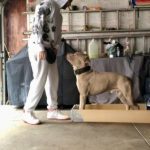 Hercules has a medium prey drive, decent energy levels, is mostly playful and goofy. He knows basic obedience that i want to take to the next level. Hes not overly nervous and mostly relaxed but, his nerves arent the best. Loud sounds or people that catch him by surprise will startle him. He's not a fan of kids and was never socialized with any while i raised him. He gets anxious, fearful and begins to growl. Also definetly dog aggressive toward most dogs. He gets "territorial" of the house and car. He will lose his cool on any new face that approaches my gate or car. i believe it's mostly fear based but hey im here to learn more. We have done small amounts of bite work with a sleeve but have been working on more impulse control.