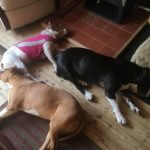 Shyne was adopted from the Brooklyn ACC by us about a year and a half.  He was 6 when we rescued him and had spent his entire life with one woman.  He was a known escape artist and had visited the ACC frequently.  The last time we were there his owner never came to get him and he was in the shelter for 2 months by the time we got him.  Shyne is a very beautiful dog and loves people.  He gets very excited when people come over to visit.  He actually gets more excited to meet strangers than hangout with us!

Shyne can be very temperamental and is our most challenging dog.  He is incredibly independent and wants to do whatever he wants, whenever he wants.  He is on the bottom of the pack in our house and is very submissive to our other two dogs, but is almost the opposite with us humans.   Shyne has shown an incredible amount of aggression towards his owners. If you want him to do something that he does not want to do, he will try and bite. He may not bite hard and sometimes it is just a warning, but it is still incredibly concerning behavior. He will not let us clip his nails and requires trips to the vet for it. If you pick him up to put him in the house and he doesn't want to go, there is a good chance he will turn around and snap at you once he is put down. On the other hand, he is a very calm dog much of the time and almost docile. He gets along with other dogs for the most part, but if a fight does occur he becomes very aggressive and will fight hard.