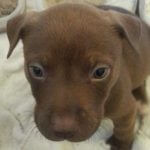 Navy is a 7 year old pitty who came to me in 2016 from a shelter where he was going to euthanized. He had grabbed a kennel worker's calf and bruised it. Shelter behaviorist described him as having barrier frustration and that the bite likely occurred due to high energy.
Navy is, when he is calm, very soft and cuddly. A ferocious licker. Navy goes from 0 to 11 when he hears a strange noise, when anything/one approaches the property. He misdirects on people and dogs. He has barrier frustration and territorial aggression with misdirection. He will also attack strangers coming into the house although we have not tested to what degree. Navy has a high level of anxiety; prone to diarrhea when he is stressed. He is under socialized and is quickly overwhelmed in new environments. He is aroused by motion, people running, bikes, cars. He is aggressive inside the car if a person approaches..