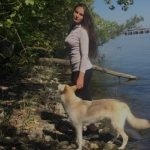 I adopted Misha when he was ~2.5. He's the first dog that I've been responsible for on my own. His previous owner had kept him chained up outside in SC and finally had to surrender him after he escaped and had been loose for weeks for the 4th/5th time. Despite this, and luckily for me since I met him for the first time as he was getting off transport, he was absolutely the perfect fit for me! He didn't have any major behavioral issues and responded well to basic reward-based training. Very food motivated. He's been my hiking/camping/exploring partner in crime :-).

Not sure if it's genetics or his crappy first few years, but he's had a variety of health issues, especially the past 3 years. He was diagnosed as heartworm positive and was treated right before I adopted him; he wore down his teeth getting loose from where he was tied up; he was diagnosed as hypothyroid at ~5 years old; he already had and has continued to get a variety of growths (lipomas, adenomas) some of which have had to be removed; he now has weakness in his hind limbs, which has been diagnosed as IVDD; he has some cognitive decline- seems to get confused about where he is/has a hard time figuring out where I am.