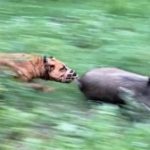 Update:
He has bonded enough his protective instincts have kicked in towards us, and territorial attitude over the truck.
Twice now he has bayed people back from getting to me, or close to the truck when I didn't know any one was around. He hasn't bit even though he easily could have.
Despite signs all over my truck a man on a dead end road I was working decided to chance it.
I didn't see it as I was working.
The man tried to pet him, which was a mistake. Man said he slapped him and jumped/ran to his truck and jumped in. If the man hadn't jumped back across the road it wouldn't have mattered.

Chet did as he should, stopped at the road, and didn't pursue. When the man finally got my attention, chet was laying under the truck ignoring the man. The man said it was his fault because he saw my signs, but thought it was for show.

Despite all his excellent qualities he will be removed from the gene pool due to a physical flaw.

He was going to be put down.
I was called because something seemed off. Wrong fit.
.
After talking I felt there was lack of leadership. Chet was to be put down for biting/human aggression.
Has good genes. All from his litter are doing exceptional. I see his potential, but there are things which any normal k9 should be attracted to that put him in flight mode.
After testing him yesterday his extreme fear response to a piece of hairon rawhide laying on the ground, explains why when I placed the rawhide chew in his crate on the way home he was as far towards the back of the crate as he could. Never dawned on me he was afraid to get near it.
Going to take a lot of work.
UpDate 9-1-18
He continues to impress me. Even for a BMC he is an exceptionally fast learner.
Show him something 1-2 times and he knows it, and he usually tries to do it right from then on. Has his hardest time when other dogs are in sight. And like a puppy his attention span is short because of so many new things from being mostly indoors previously.
Urination is gone. One incident since I have had him after staying the night in the kennel, and was during the time he seemed to be rehydrating, but he was doing a peepee dance at the time. If he is doing that dance let him out first and no problems. Have actually gotten him very excited and still no urination.
Lots of work, trial and error, encouragement, on reaching for his drives, along with lots of love and praise when he shows them seems to be working.