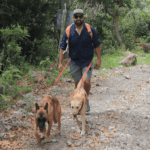 Lola was my wifes dog and we actually met through her and my dog. She was picked off the street by my wife when Lola was just a few weeks old. Full of worms, My wife Lorena was not allowed to have any pets in her apartment so she kept Lola hiding from the landlord until she got caught and had to relocate - then luckily she became my neighbor.

Lola had a lot of behaviour issues in the beginning. At 1 year she totally did a 180 and went from hyper to super lazy. She loves food, sleeping and giving kisses to everyone. She is the alpha of our pack and no one messes with her. She has a great personality but is not too trainable - also not really needed though.