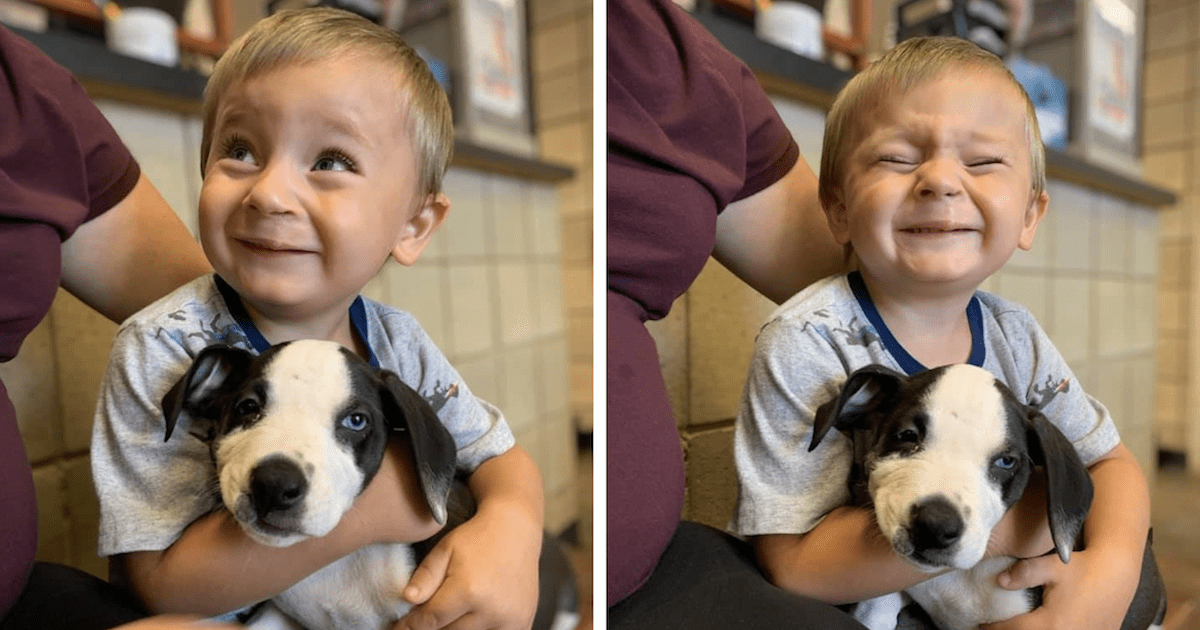 2-year-old Bentley Boyers was born with a cleft lip. As a newborn, it made simple tasks like eating a struggle. Since then, Bentley has gone through corrective surgeries to help fix the birth defect, but he still knows he’s a little different from other toddlers. All he needed was someone he could relate to.

Brandon and Ashley, Bentley’s parents, decided to adopt a special puppy for their son. This pup has a cleft lip just like Bentley, so it was like love at first sight.

Brandon initially visited the Jackson County Animal Shelter in Michigan to adopt two chickens, but he stopped in his tracks when he came across a special puppy. A black and white puppy appeared to have a similar birth defect to Bentley. In a heartbeat, Brandon video chatted with his wife to show her the 2-week-old rescue pup.

In a heartbeat, the couple decided to adopt the puppy. Only a few days later, they returned to the shelter with Bentley, who was eager to meet his best friend. The family had yet to choose a name for the pup, but Bentley made it clear that this was the perfect dog for him.

Bentley and the puppy shared an instant bond at the shelter. Photos of their interactions showed them cuddling with each other from the start. The puppy even seems calm and comfortable in the little boy’s hands.

“To see him have something in common with a puppy means a lot ’cause he can grow up and understand that he and his puppy both have something that they can share in common,” said Ashley.

The shelter admits that they rarely get dogs with cleft palates, so this truly was a miracle for the family. The staff explained that the puppy’s birth defect doesn’t hold her back at all. She might look different than other puppies, but it doesn’t stop her from living her best life.

When Bentley gets older, he will have to go through a bone-grafting surgery. But now, he has a new best friend who will be there to support him. The sweet puppy knows exactly what Bentley is going through, so hopefully, she can help him feel safe as he goes through the next steps in his medical procedures. The two truly are a perfect match.