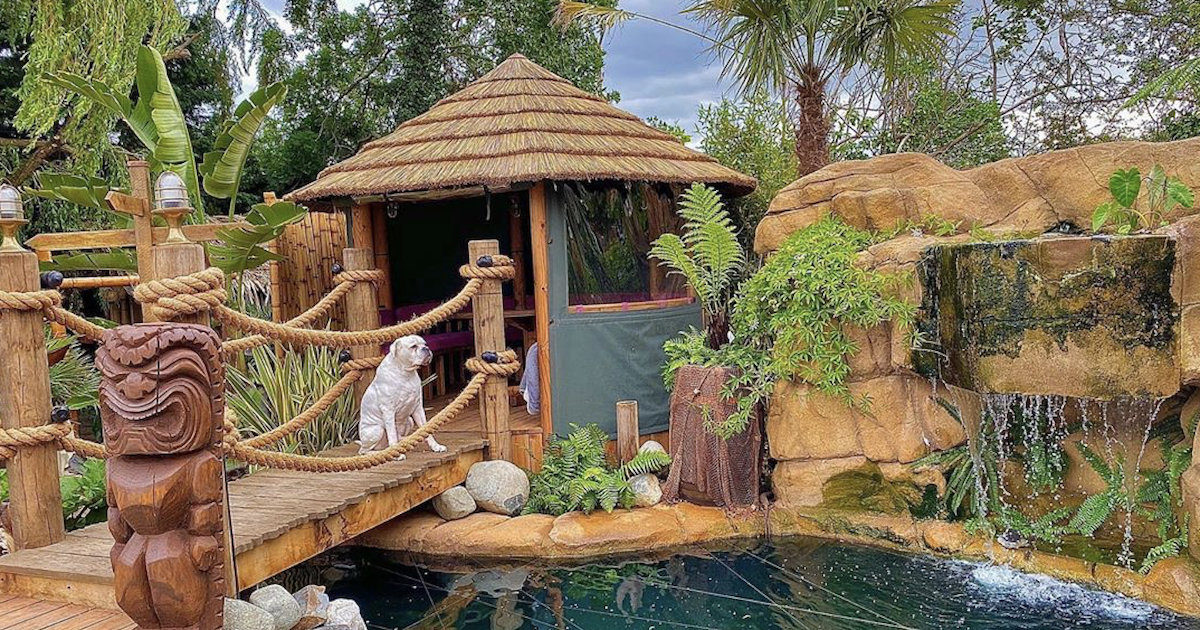 Most proud dog parents would do anything to keep their furry friends happy and safe. But some definitely go above and beyond in terms of creativity. Dog dad Chris Lodge might look tough, but he has a soft spot for his beloved Boxer named Dice.

The 10-year-old pup was recently diagnosed with heart murmurs, which can cause seizures if he gets too excited. This prevents Dice and his family from traveling, which isn’t fair for any of them. So, Lodge decided to turn his own backyard into the perfect vacation destination for his senior dog.

Dice can’t even go for long walks or explore far from home without being at risk of seizures. His parents also aren’t willing to leave the pup alone for too long. Therefore, their vacation plans have been non-existent since the dog’s diagnosis.

“We can’t get away on holiday because we know how to handle him if he has a seizure, and if anything happened to him when [we weren’t] around, I’d never forgive myself,” said Lodge.

So, Lodge came up with the idea to bring a vacation to their very own backyard. That way, he and his wife can have their own personal getaway while Dice has his own space to explore. It took over three years and thousands of dollars to complete, but it was well worth it in the end.

Lodge designed Dice’s backyard paradise as a tropical resort. It has a running waterfall, koi pond, Tiki hut, and rope bridge. It also has a wide variety of tropical trees and other plants. Dice now spends most of his time napping on the bridge with the soothing sounds of the waterfall in the background.

“We don’t have children and he is our baby. He runs the house, to be honest,” said Lodge. “Every day [in the yard] is a new adventure for him.”

Lodge needed the help of his wife and some friends to complete the masterpiece. They started by making the bridge and tiki bar, but then they had to clear the old trees and deck to make room for the koi pond. Lodge laid down pipework before building the final structure. Along the way, his friends helped him sculpt the rock patterns.

The paradise lights up at night, allowing Dice to admire it at any time of day. It might seem extravagant for a dog, but Dice loves every detail of his new environment. He can stare at the koi pond for hours on end without getting bored. His dad truly went above and beyond to make his life amazing. He sure is one lucky pup!