I have continued work with him and he does very well with me now.

He is more distrustful of women than men. Especially blonde women.

If he is loose he does well with my wife.

She still can't get him out of the kennel. She has been going to the kennel more to try and ease his reactions, but as yet still no lessening of his hackles raising, and trelaxing of the tail. Out of the kennel it's okay.

Although he has gotten after a few people, when I though we were in the middle of nowhere alone and they got to close to the truck, he has never bit anyone except myself since I have had him. I keep a very close eye on him when out and about. Make sure there are none close before releasing him in the woods or keep him in sight.

If he sees any chainlink fence when driving he still gets super excited, and hard to handle, looking for another dog and wanting to play.

Even though had originally planned to rehabilitate, and rehome he will be with us from now on. Due to characteristisc of some in his breed (distrust of strangers), and learened behavior it is unlikely a suitable home could be found.

Whereas his brother Ace will bark so people know he is there slighly lessening risks, Chet is silent until the last moment. So far he has only bayed people back, and does no more than neccassary to protect himself, and what he sees as his territory. 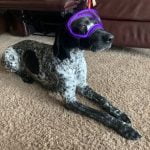 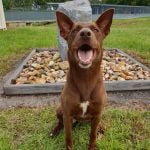