A month of EO has helped with his defensive aggression with me.

I'm calling it defensive aggression as for all appearances when called after he had urinated, or with a sweet coaxing voice he got more wary to approach, leaning over and patting my leg to coax him only increased his caution to approach.

He now approaches more direct without feeling a need to come in a circular arc.

I have used treats to alleviate some of the caution also.

5 months ago couldn't touch his head with both hands, having something in one of them would lead to a bite. Now I have been able to pretend to put things in his ears with no issues.

Incedent at lumber yard where someone made several grabs at his head didn't provoke a sudden outburst although his head movements did show a desire to engage aggressively he didn't.

It doesn't transfer to my wife when outdoors.

An issue with my wife I have never had is getting him out of the kennel or crate. My wife can't.

That will be next on the agenda. 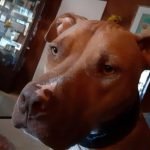