A new study suggests there’s a connection between a dog owner’s stress levels and the dog’s misbehavior when left home alone.

Member/Certificant Announcement The leadership of the International Association of Animal Behavior Consultants (IAABC), the Association of Professional Dog Trainers (APDT), the Certification Council for Professional Dog Trainers (CCPDT) are pleased to announce the adoption of a Standards of Practice, a unified code of conduct, and code of ethics. Strong professional ethics, education, and expertise within…
The post Member/Certificant Announcement appeared first on APDT.

With so much contradictory information from dog professionals, how can you find a good fit? Beware misleading words and trust your instincts.

Is getting a second dog really the right thing to do?

Behavior issues in dogs and cats are not always considered a problem, so what makes us see something as problematic – and when should we seek help?

Is the link between owner personality and dog behavior down to the training methods people choose?

A new study finds service dogs may help veterans with PTSD, as shown by physiological and psychological measures.

Humans and dogs share similar social behavior and emotions, but are likely to misunderstand each other because they speak different languages. It’s up to us to bridge that gap.

The behavioral expectations we have for our companion dogs sometimes do not match with the reality of their lives or ours. A few accommodations can go a long way.

Deciding what is the best dog food to feed your dog will drive you crazy! You sifted through all the information on the internet, product pushes from your veterinarian, and advice from all your savvy dog-owning friends, but you still find conflicting information. The truth is, even the most educated […]

Does your dog growl? How growling actually keeps us safe.

Will the average pet dog protect you from an attacker?  It depends on a lot of factors, but here we test a few average family dogs without any formal training.

Let’s start with some definitions.
What is punishment? Punishment is used to stop an unwanted behavior. It can be classified in positive and negative. We are easily confused by these adjectives, positive and negative. What is their meaning and how are they used in behavioral medicine?
Positive does not mean that it is good, but it means that an aversive is added to stop a behavior. It is the recipient of the punishment that perceives it as an aversive, not the punisher. Aversive is anything that is unpleasant and painful to the recipient. Examples of positive punishment are: raising your voice, spraying water, shaking a can with coins or pebbles in it, choking, physical reprimands and shocking.

Negative does not mean it is bad, but it means that something that the pet likes is removed to interrupt a behavior.  A classic example of negative punishment is the time out: I remove a dog from a social situation to isolate and confine him/her in his/her crate or in a room away from his family members (dogs are social animals that do not enjoy being by themselves!). Or I move away (or turn around) from a jumping dog to not offer him/her leverage and by doing so I do not reward the dog with my attention (something that the dog craves for).

I come back often to this topic because there are still clients that think and believe that by punishing their pets any behavior can be changed, corrected or eliminated. Why? Mostly because the “social dominance theory” is still preached right, left and centre even if science has widely proven that no dog or cat is here to dominate people. Believe it or not, there is no secret army of pets waiting to take over the world as this is not the planet of the apes! If we assume that this is true (which it is not!) we have to “show who is the boss” to our furry friends which implies using confrontational methods (physical coercion) to teach them who is in charge.

Luckily, we do not have to do that. As I mentioned, science (based on facts and not personal opinions, myths or legends) has shown that positive punishment makes our pets just more anxious, fearful and as a consequence more aggressive toward their humans. The pet becomes aggressive not because he is trying to be dominant over his/her punisher, but because he/she is simply protecting him/herself from a threat (sadly, we can be seen that way).

As a pet owner, I want a relationship based on respect and love, not on fear or painful experiences. In order to achieve this, we have to learn how our pets communicate, we must learn their language (facial expressions, body postures and vocalizations) and to not expect that they will learn ours. Sure, dogs and cats can learn and recognize some words, but what they rely on mostly is our body language (they observe us closely!) and the tone of our voices.

As a veterinarian, I took an oath and among other things I promised “…. to use my scientific knowledge and skills for the benefit of society through the protection of animal health and welfare, the prevention and relief of animal suffering, …..”. Translated in English: I am not here to harm my patients, but to take good care of them. The oath refers to animal welfare as well. Anytime we refer to animal welfare, we must keep in mind the so-called Five Freedoms:

Freedom from hunger or thirst by ready access to fresh water and a diet to maintain full health and vigor
Freedom from discomfort by providing an appropriate environment including shelter and a comfortable resting area
Freedom from pain, injury or disease by prevention or rapid diagnosis and treatment
Freedom to express (most) normal behavior by providing sufficient space, proper facilities and company of the animal’s own kind
Freedom from fear and distress by ensuring conditions and treatment which avoid mental suffering
Clearly, punishment is not listed as a way to guarantee animal welfare. Punishment backfires easily and other than breaking the bond with our beloved pet, it teaches animals learned helplessness. Learned helplessness is a mental state in which an organism forced to bear aversive stimuli or stimuli that are painful or otherwise unpleasant, becomes unable or unwilling to avoid subsequent encounters with those stimuli, even if they are “escapable,” presumably because it has learned that it cannot control the situation (definition taken from the Encyclopaedia Britannica).

This why the use of shock collars (or of any other aversive) is never recommended in behavioral medicine, but it is always discouraged. Shock collars (or invisible fences) do not solve any behavioral problem, they only suppress them. In fact, as soon as they are removed from the dogs’ necks, those dogs will show the same behavior they were supposed to stop. They do not work, they just hurt. They cause learned helplessness which is a form of psychological trauma. A trauma that is not visible with the naked eye, but still a trauma. Also, shocking pets is considered a form of physical abuse.

Punishment is extremely difficult to implement correctly as it has rigid rules to follow:
It should be administered within 2 seconds from the start of the unwanted behavior (punishing a pet hours later does not correct anything);It should be intense enough to startle the pet, but not make him/her scared;It should be given every time the pet misbehaves (sometimes we are not even with them when they perform unwanted behaviors).

Note that when anxiety and fear are the cause of our pets’ problems, positive punishment will only add anxiety and fear to the mix and not cure anything. Their problems will become just worse.
Punishment gives us a fake sense of control and we use it because we feel better afterwards as the unwanted behavior stops even if for short period of times.

Fear and anxiety are mental illnesses and as any other medical condition they should be addressed properly by a veterinarian. Science as shown us how, our job is implementing what science has taught us and to leave behind us ridiculous and harmful myths. Our pets deserve better.
Sabrina Poggiagliolmi, DVM, MS, DACVB 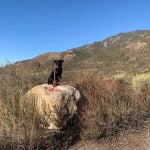 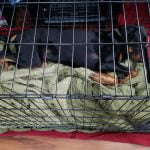